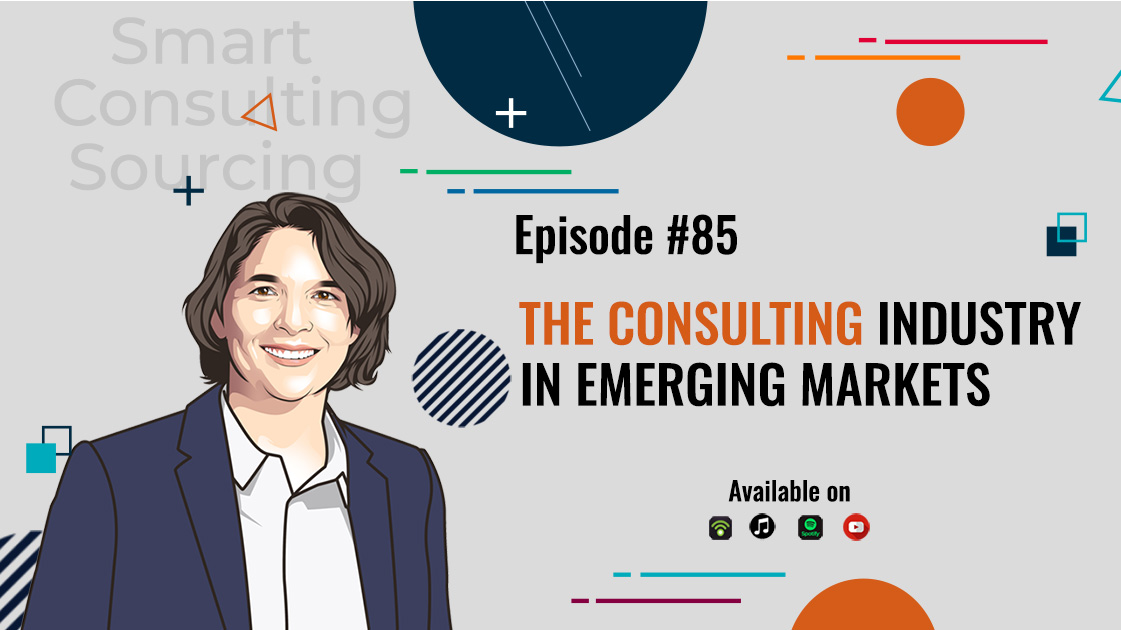 Even the big consulting houses are keen on spreading their roots in these emerging markets. Even though North America and Europe remain the two most preferred consulting destinations, a slow but steady shift in the outlook is hard not to notice.

In this episode of our Consulting Sourcing podcast, Helene examines the regional dynamics of the consulting industry, and how a new order is emerging with traditional players and rising stars — both playing their parts in this evolution.

Management consulting originated in North America, not Europe. So it won’t come as a surprise that North America is the world’s largest market for consulting services and represents 40% of global sales.

Europe is the second largest Economy in the world. Growth is somewhat stable, slightly below 2% despite the Brexit dip for the UK and the rest of the continent.

Emerging Markets and Developing economies are growing at 2.5X faster rate than advanced Economies (USA, Euro Area, Japan). In 1995 the E7 (China, India, Indonesia, Brazil, Russia, Mexico, Turkey) was half the size of G7 (US, UK, France, Germany, Japan, Canada, Italy) at GDP level. By 2040, it could be double.

Historically, Consulting Firms that grew internationally followed their clients as they were expanding abroad with several companies like McKinsey triggering this trend at the end of the ‘1990s,.

Hello and welcome back to Smart Consulting Sourcing, the only podcast about consulting procurement.

I am Hélène, and today we will be talking about the consulting industry in emerging markets. However, before that, let me give a recap of last week’s podcast.

Global sourcing is a procurement approach aimed at utilizing global efficiencies in the delivery of products and services.

It is a centralized procurement method used by multinational corporations to achieve economies of scale through corporate-wide uniformity and benchmarking. Global sourcing, in a nutshell, is a “sourcing strategy” that coordinates the world’s most cost-effective production and operation inputs.

What about consulting? The industry has been changing over the last 20 years. Consulting firms have been trying to embrace more diversity, and help their employees find a better work-life balance. And the pandemics that kept all of us working from home for several months has precipitated the move.

It is now possible to work mostly remotely. Virtual workplaces can help teams from all over the world come together and collaborate. Travel is then limited to the strictly necessary. In a digital work indeed, global sourcing can be sustainable!

Listen to the complete podcast about How can Global Sourcing be sustainable for Consulting?

However, this week, I want to discuss the consulting industry in emerging markets.

A Global Market With Local Players

Management consulting is an intriguing industry. While most of the clients are already or are becoming part of global corporations, the consulting sector remains scattered. As our global directory of consulting firms, conavigo.com, shows, about two-thirds of companies have less than ten employees.

Even though it is not unusual for those firms to send consultants overseas, it becomes challenging to establish their global presence.

Historically, Consulting Firms that grew internationally followed their clients as they were expanding abroad. At the end of the ’90s, several companies like McKinsey opened dedicated departments helping companies to grow East or offshore activities. Today the same companies are helping Eastern companies to grow West or to embrace Western management practices.

When you think about direct procurement, would you source from the local neighborhood or take advantage of the global market? Would you always use the same providers? You would probably inject some competition to ensure you get the best supplier.

Actually, you can play the same game with Consulting, and your supply options are almost unlimited once you know the market well enough.

Heading Towards a Shift in the Balance of Powers

Emerging Markets and Developing economies are growing at 2.5X faster rate than advanced Economies (USA, Euro Area, Japan). In 1995, the E7 (China, India, Indonesia, Brazil, Russia, Mexico, Turkey) was half the size of the G7 (US, UK, France, Germany, Japan, Canada, Italy) at the GDP level.

By 2040, it could be double. Today the two groups are around the same size. Yet consulting in the E7 is growing fast but nowhere near the extent it has achieved in the G7 countries.

The Consulting market after years of diversification and segmentation is now rather fragmented. Each region develops at its own pace based on the maturity of both customers and suppliers of consulting services.

But, What Are the Differences Between the European and the US Consulting Markets?

There are many similarities between these two markets, Both North America and Europe are now mature markets where the use of Consulting Services is no longer a novelty. They focus on digitization, innovation, marketing and sales, technology, and operational improvements. However, they have their unique differences.

The primary difference is about the size.  Management consulting originated in North America, not Europe. So it comes as no surprise that North America is the world’s largest market for consulting services and represents 40% of global sales.

The United States has by far the most significant number of practitioners and consulting firms. It also generates more revenues than all European nations altogether.

North America has been the first region to embrace the added value provided by Consulting. Given the strength of its economy, it is no surprise to find North America the largest market for management consulting. According to most market research firms, the market is estimated at around $100 billion with a CAGR of 4%, slightly higher than GDP.

Europe is the second-largest economy in the world. Europe currently fires on two engines.

With the UK, Germany, France, and Italy, the western part of Europe comprises four of the top 10 economies in the world. Growth is somewhat stable, slightly below 2% despite the Brexit dip for the UK and the rest of the continent.

Meanwhile, Eastern Europe, starting from a lower base with Poland, Bulgaria, and Slovakia in particular, is growing at a higher rate, close to 4%.

What About the consulting industry in Emerging Markets?

Asia, the Middle East, and Africa are all developing at a much quicker pace than mature regions. Asia-Pacific is the fastest-growing market with lots of promising prospects for Western consulting firms in Japan and Oceania and several fast-growing emerging markets.

Despite the slowdown in China, Asia will continue to drive global growth stabilized at around 6%. The region shows significant differences across countries. India is spearheading the region north of 7%, with Japan close to 1% and South-East Asia accelerating, thanks to robust local demand.

With the severe challenges that have affected all nations and enterprises, LatAm is still in rehabilitation mode. And Brazil is, without a doubt, the most important market with over a thousand different service providers.

Fourteen countries are now members of the Oceania economic region. However, Australia and New Zealand account for 97% of the associated GDP. The region is growing approximately 3% on average – one of the fastest growth rates among the mature economies.

Economic growth is also underpinned by population growth above average and significant government investments.  Key economic sectors include Mining, Financial Services, Agriculture. The aging population will cause an increase in Health Care and Social Services sectors. Manufacturing is facing serious headwinds, as with many other developed and high-wage economies.

Most of the major Consulting Firms have expanded their roots in developing countries, establishing generalist offices. On the other hand, local firms continue to make up a significant portion of the providers (according to Conavigo.com, 71% of providers are only based in one region). With the industry’s segmentation and typification, there is an infinite variety among Consulting.

It is a well-known fact that consulting originated in North America; the affluent European economies were quick to follow the suit in leveraging the power of consulting. Over the years, North America emerged as the industry leader with the western European countries trailing close behind.

Fast forward to the 2000s and we find these two primary consulting regions to be competing with a sizeable number of contenders based in different regions, geographies and even hemispheres.

You have a strong understanding of the regional dynamics in each geographical area presently. North America and Europe’s more mature consulting markets are concentrating on digitization, innovation, marketing and sales, technology, and operational improvements today.

[The consulting industry in] Emerging markets and the rest of the globe provide exciting potential, with a higher pace of development than developed markets, but each nation and area has unique problems. It remains to be seen what the future holds for both consultants and clients.

And that marks the end of our podcast, folks. Next week, I want to talk about Social responsibility & consulting sourcing. So, stay tuned.

Till then, stay safe and happy sourcing!

If you have other questions about The Consulting Industry in emerging markets, remember you can contact me directly on LinkedIn or by email because I am always game for a chat!

Bye and see you next week! Au revoir!

For future-ready travel companies, data can be the most powerful asset in recovering from Pandemic crises as well as fuelling future growth. #Travel #Data #Recovery @Accenture

Accenture details how travel companies can create value from data by using it to fuel their return to growth, and enjoy major benefits. Learn more.

Homestay & hostel brands are flocking to the Indian market now as this is a relatively unexplored opportunity although some early adopters are already reaping the gains. Read full article for more insights. #Travel #Leisure #Tourism #AdventureTourism
https://hotelivate.com/hotel-development/experience-economy-of-the-new-age-traveler-and-the-rise-of-alternate-accommodation/

Wishing #India peace, prosperity and continued success in the arena of science, technology and culture. Love to the people of India and our dear colleagues, clients, and partners from the Indian Subcontinent #IndependenceDayIndia2022

Gergana Nikolova, the director of Adventure Travel Trade Association is in conversation with David Beurle, the CEO of Future IQ about the connection between adventure tourism and sustainability and more. #AdventureTourism #travel . @ITB_Berlin

How should corporate decision-makers respond to the fallout from the conflict to manage Russia/Ukraine exposure? AlixPartners has come up with a unique tool that can help those adapting to a possible escalation of sanctions. #Aviation #Recovery #Travel 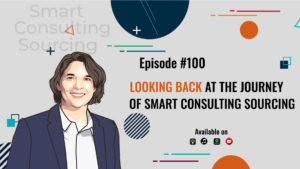 Looking back at the journey of Smart Consulting Sourcing

Looking back at the journey of Smart Consulting Sourcing

Journey of Smart Consulting Sourcing: Whether you've been with us from the very beginning or you're just joining us now, we hope you enjoy this special episode. Do let us know what you found inspiring or made you smile! 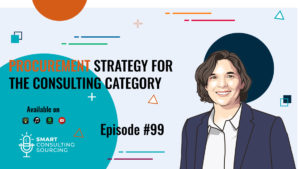 Procurement strategy and why is it important in consulting?

Procurement strategy and why is it important in consulting? 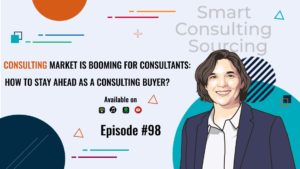 Consulting Market is booming for consultants: How to stay ahead as a consulting buyer?

Consulting Market is booming for consultants: How to stay ahead as a consulting buyer?

In this episode of the Smart Consulting Sourcing Podcast series, Helene shares some insider tips that consulting buyers can follow to stay ahead in this rapidly changing landscape and buy consulting services like a boss. Only a person with deep familiarity with the industry can coin these techniques and they can be very effective in earning a winning edge when it comes to hiring a consultant in a booming consultancy market. So, don't miss it.