Today, the African market has significant potential for expansion, particularly as the continent faces huge economic and social problems, including a move to a more diversified economy focused on both industry and knowledge.

The Evolution of the African Consulting Industry

The introduction of strategy and management consultancies in Africa was a defining moment for the continent. Although the African market represents roughly 2% of the global 100 billion US dollar market, the advisory industry’s growth potential is remarkable, and its influence is quite significant.

Currently, the African consulting industry is estimated to be worth over $2 billion and is growing at a rate of around 5-7% per year. This growth is being driven by several factors, including the increasing demand for consulting services from African businesses, the rise in the middle-class population in Africa, and the rise of African multinationals.

In addition, governments of many African countries are increasingly turning to consultants to help them with their development goals. As a result of all these factors, the African consulting industry is expected to grow significantly in the next few years. This will also help African businesses to become more competitive and boost the continent’s profile in the global economy.

Presently, the African consulting industry or market is pretty substantial and is already regarded as a significant market because of its steady growth over the years.

In fact, the African consulting industry is actually bigger than many of the European markets such as that of Spain and Italy.

Consulting services are available in well over 30 African countries with South Africa, Nigeria, and Morocco taking up the top three places on the list.

When you talk about the market as per region wise, then it’s not surprising that Southern Africa alone accounts for around two-thirds of the whole consulting market in Africa.

With double-digit growth in West Africa, particularly in Nigeria, and East Africa, benefiting from the lessened appeal of Asian countries, Africa continues to position itself as an attractive region.

As a result of the fast-expanding economy and the government’s push for innovation, it is anticipated that the African market as a whole will continue to expand significantly. Of course, there are hazards for consulting businesses in the region, including political instability and troubles of getting paid. Even, despite these factors, the market has enormous potential. 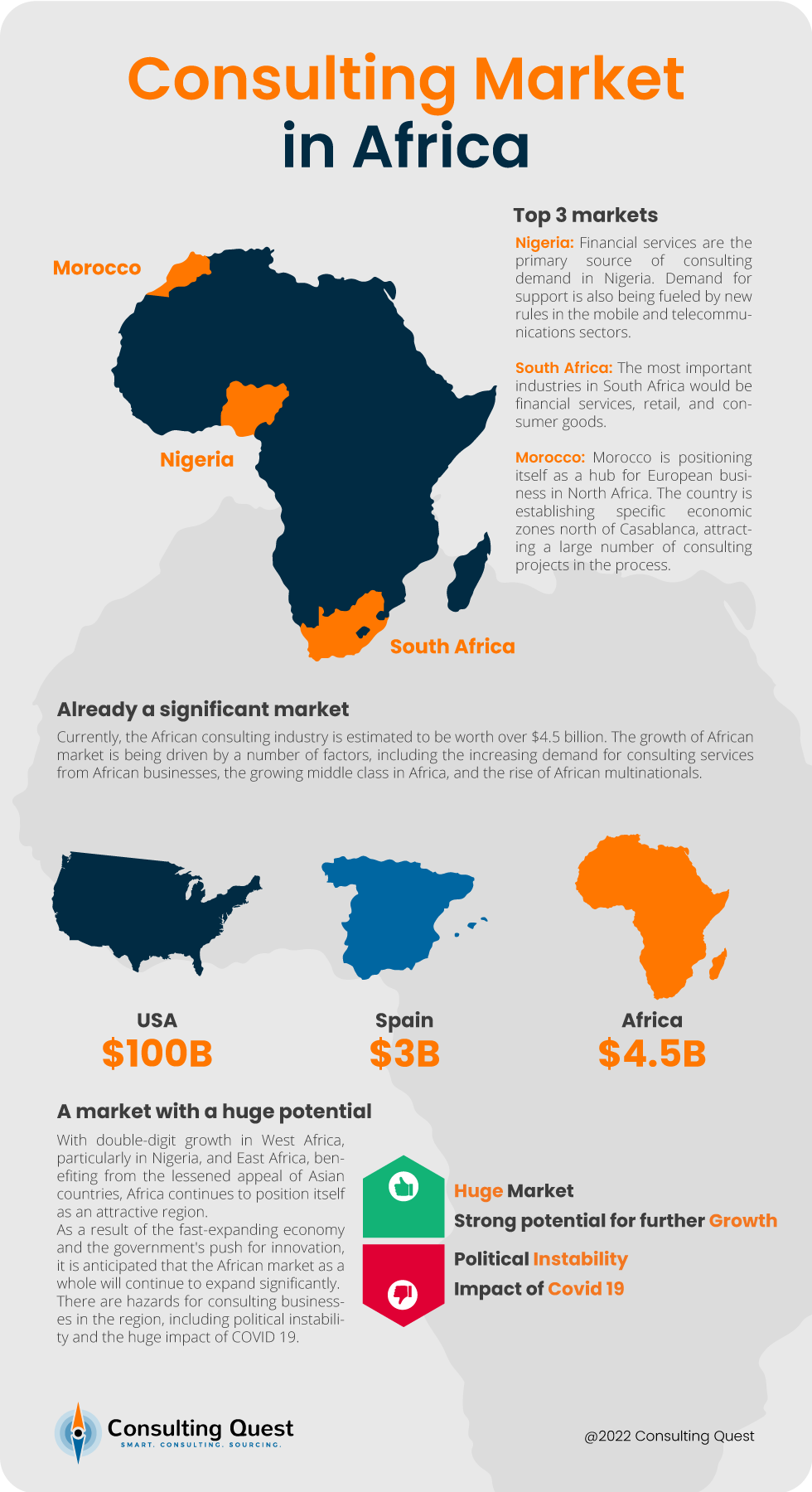 The African Industry 2022 – How Africa Is Transforming Itself!

Africa has a lot of resources, a lot of different cultures, and a very young population. It has all the tools it needs to grow economically at a good rate, as long as it has good leadership and more political stability.

Management consulting can be an important way for companies and organizations in the region that want to grow and improve to get the help they need. Moreover, the region’s economy is growing at a pretty good rate, and it is also an interesting market for consulting.

However, it still is a difficult market, and the pace of its growth has changed a lot in the past few years. The good news is, the African consulting industry is surely transforming itself and how!

Africa is predicted to develop at a rate of roughly 3%, owing to the robust performance of the region’s two major economies, Nigeria and South Africa, as well as stronger growth in Sub-Saharan Africa. The region’s growth will be primarily reliant on natural resources, both in terms of oil and gas and mining.

According to the IMF, Ethiopia and Western Sub-Saharan countries should have the fastest growing economies, with growth rates above 7%. Ethiopia is pursuing an export-oriented strategy of infrastructural development and industrialization. Senegal, Ghana, and Ivory Coast rely on agriculture and energy in tandem.

African economies, according to McKinsey Global Institutes, could profit from new technology while avoiding the liabilities of existing infrastructure. Mobile technologies, cellular, the Internet of Things, as well as digital marketplaces, are predicted to rise by 25% in the coming years.

To support regional growth, several sectors must need to develop rapidly in the near future.

On a global scale, the African consulting industry has been doing pretty well and one of the main reasons for that is the dominating effect by foreign companies.

According to data collected by ConPulse, a CQ Global directory, around about 29% of consulting businesses in Africa are large consulting firms (with 1,000 or more employees). This percentage is much greater than the anticipated global average of 10%, indicating that large global consulting firms are over-represented in Africa compared to the rest of the globe.

However, things are changing. Notwithstanding the considerable presence of multinational enterprises in the region, 57% of consulting firms are established solely in Africa. Moreover, nearly half of these organizations have less than 50 employees. This indicates that specialist local businesses are on the increase.

A Market With a Small Number of Countries and Clients

The consulting industry is worth an estimated $10 billion. It is strongly skewed toward larger countries such as Nigeria and South Africa, with growth slightly above those economies’ gross domestic product (GDP) of 5%.

Nigeria: Financial services are the primary source of consulting demand in Nigeria. Demand for support is also being fuelled by new rules in the mobile and telecommunications sectors.

South Africa: The most important industries in South Africa would be financial services, retail, and consumer goods.

Ethiopia: Ethiopia is a leader in terms of growth and demand in Eastern Africa, with projects aimed at developing the country’s infrastructure and industrialization.

Morocco: Morocco is positioning itself as a hub for European business in North Africa. The country is establishing specific economic zones north of Casablanca, attracting a large number of consulting projects in the process.

The SMART Africa initiative, which has been endorsed by all 53 heads of state and governments present at the African Union Assembly, is anticipated to use ICTs to help Africa expand economically and create jobs. As a result, Digital Projects are thriving all throughout Africa.

Africa is a challenging environment for consulting due to commodity volatility, political instability, and continued reliance on foreign investment. Western Consultancies continue to provide the majority of consulting services.

While they earn the right to adjust to local demands, they continue to prioritize major clients and governments. The African consulting industry needs more local consultancies that private sector entities can leverage!

An Industry Focused on Strategy and Human Capital

As per ConPulse, a Global Directory platform, the African consulting industry has its capabilities fixated on these three main capabilities: strategy, human capital, and operations. And technology, which is perhaps the most prevalent capability among major organizations (with 1000+ employees), is the region’s fourth-largest capability, despite being ranked just sixth globally.

Moving on, a total of 2.5 capabilities are covered on an average in the African consulting industry. Surprisingly, about a quarter of all consulting businesses in Africa specialize in just one competency. On the other hand, the number of niche, local, and small consulting firms is increasing. 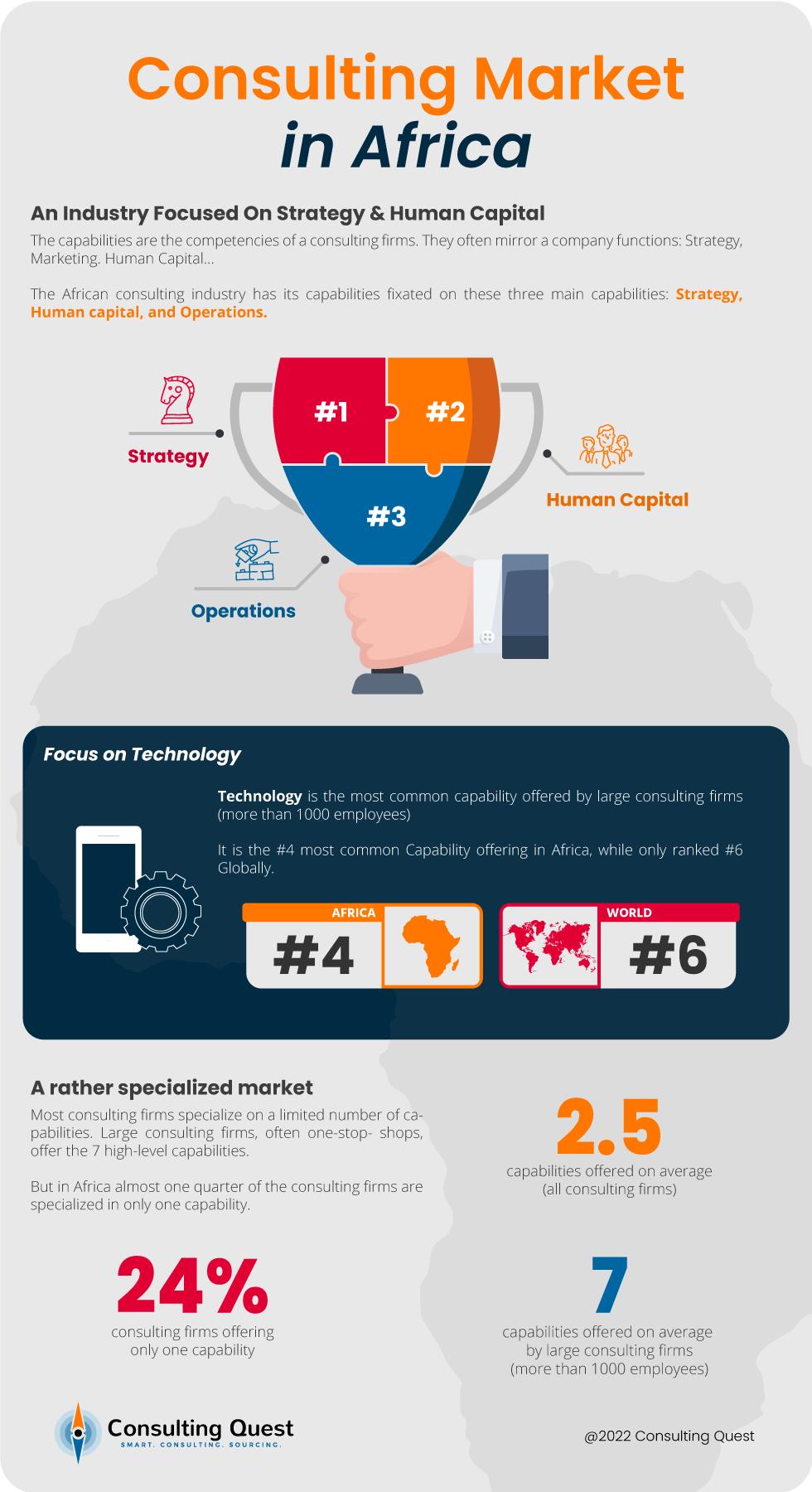 Surprisingly, the consultancy offering does not represent the demands of the local community, which are mostly focused on agriculture, natural resources, and financial services.

Furthermore, almost 14% of consulting firms in Africa specialize in a single industry, despite the fact that the average number of industries covered is 6.3. This data supports our earlier observation that large global consulting firms are over-represented in the region as compared to the rest of the world.

The Top Consulting Firms in Africa

Africa’s consulting sector is worth billions of dollars and is comprised of hundreds of consulting firms. It includes a major, mid-sized, boutique, and specialty consultancies that provide services to clients across all industries and segments and specialize in every imaginable area of expertise.

However, only a select bunch of consulting companies may claim to be leaders in the African consulting industry or major players in their respective niches. Especially because Africa’s consulting business is very competitive.

To have a closer look at the top consulting firms in Africa, we’ll break down the top players across different dimensions, namely:

#A. Top Consulting Firms In Africa By Area Of Expertise

The African consulting industry specializes in well over 40+ areas of expertise. The below table will give you a better understanding.

#B. Top Consulting Firms In Africa By Industry Expertise

Now, let us look at the top consulting firms in Africa as per industry expertise. The below table will give you a better understanding.

Over the years, the African consulting industry has seen its fair share of ups and downs. Moreover, the sector was severely harmed by a number of obstacles during the pandemic.

But, as is customary in Africa, the opportunities are equal to, if not greater than, the obstacles. Clients, in particular, want to deal with consulting firms that can demonstrate that they provide superior solutions—and they’re willing to pay more for it.

Africa’s future looks bright, and hopefully, it will continue to progress on the right path.

The rise of Experiential, immersive travel has catalyzed the growth of boutique and lifestyle hotels across the globe. Hotelivate examines the trend with a special reference to the Indian market. #hospitality #twic #consulting @Hotelivate
https://hotelivate.com/travel-tourism/experience-economy-and-consumer-experience/

Our warmest greetings to all our Indian friends as they come together to celebrate the spirit of a peaceful and progressive India.
#IndianRepublicDay
#ConsultingQuest

In this issue of This Week in Consulting, we explore key trends shaping the future of hospitality, which promise to be quite exciting on all these fronts. #hospitality #twic #consulting #consultingquest
https://consulting.wiki/hospitality-industry-2023-discover-whats-in-store-this-week-in-consulting/

Welcome once again to another round-up of consulting M&A news! We’ve got lots to cover this week since there... 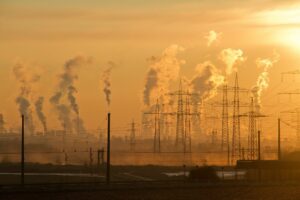 The war in Ukraine is an ongoing source of disruption which is causing heaps of difficulties in the business world. Hence, businesses must stay prepared for uncertainties all the time and constantly evolve to stay relevant amid fast-changing market conditions. In this situation, consulting is going to play a critical role in dealing with these disruptive factors. 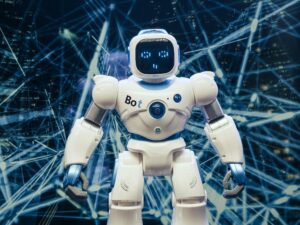 Is AI Going to Impact the Consulting Industry in 2023?

Is AI Going to Impact the Consulting Industry in 2023?

AI has had a huge impact in the digital age for firms of all kinds, including the consulting industry. But will the trend continue in 2023? Only time will tell! 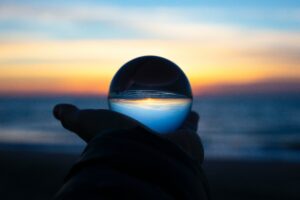 Looking Ahead – How Consulting Clients Can Prepare for 2023

Looking Ahead – How Consulting Clients Can Prepare for 2023

Many sectors are likely to need support from consulting services in the coming years, especially as the business landscape continues to evolve. In this article, we look ahead and see how consulting clients can prepare for 2023.